HOME > Travel Magazine > Niigata Prefecture > Everyone who wants to be a billionaire gather! Why don’t you pick up gold dust on the oldest gold mine in Sado Island, Nishimikawa Placer Gold Mine?

Everyone who wants to be a billionaire gather! Why don’t you pick up gold dust on the oldest gold mine in Sado Island, Nishimikawa Placer Gold Mine? 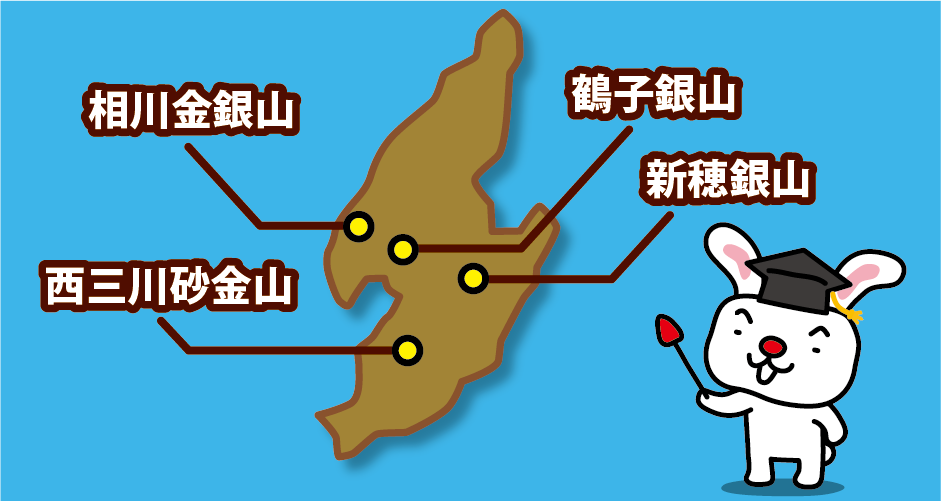 The oldest gold mine on Sado Island is Nishimikawa Placer Gold Mine. In the “Konjaku Monogatari” (Tales of Konjaku) in the late Heian period (around the 12 century), there was a legend that gold dust collection had been carried out. In the latter half of the 16 century, Kagekatsu Uesughi, who ruled Sado, reinvented Nishimikawa Placer Gold Mine, and the produced gold dust was sent to Hideyoshi Toyotomi. 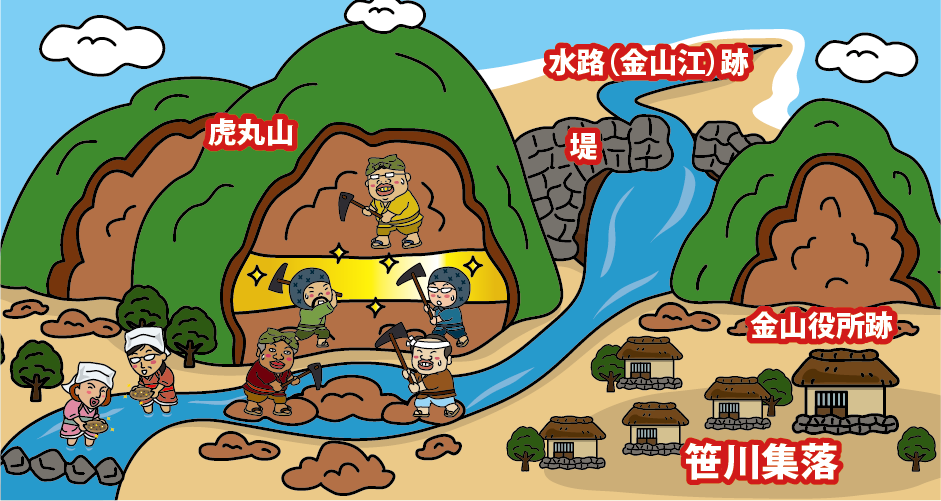 Sasagawa Village, which is located around Mt. Nishimikawa Placer Gold Mine, was called “Sasagawa 18 coins Village” because 18 oval gold coins (about 2.9 kg) were paid monthly as tax at that time. (It is said that the gold dust produced in Sasagawa Village, which Kagekatsu Uesughi paid to Hideyoshi Toyotomi, is one fourth of gold collected from all over the country.)

Even during the Edo period, it was positioned as an important mine in Sado gold and silver Mine, and it continued to collect gold dust, but since the 18 century, the volume of output has gradually decreased and closed in the beginning of the Meiji period (1872).

After the closing of Nishimikawa Gold Dust Mine, people in Sasagawa village, who had been collecting gold dust, changed the way of life to agriculture, but there were many mountains and water channels in the area around Sasagawa village, and there remained landscapes that were almost same as those in the Edo period. In 2011, it was selected as a important cultural landscape in Japan for a “landscape of agricultural mountain villages originating from Nishimikawa Placer Gold Mine in Sado island.” 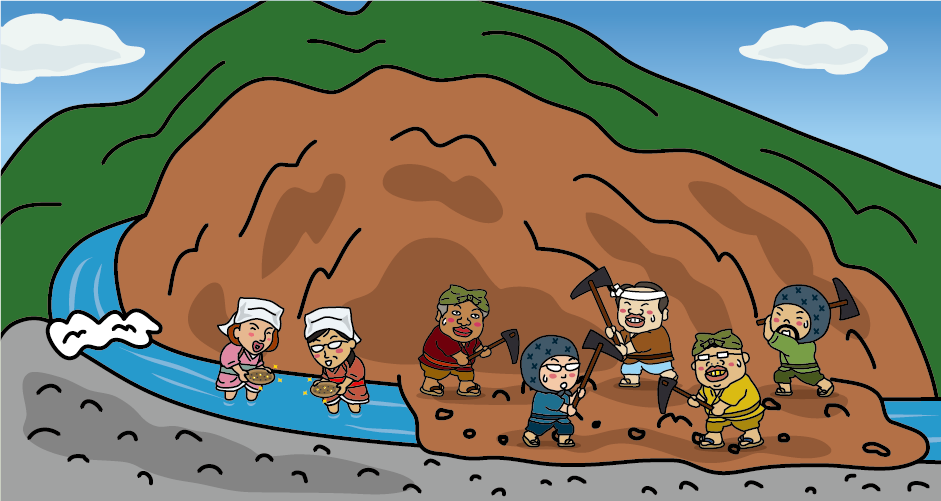 Mt. Toramaru was the largest mining site of Nishimikawa Placer Gold Mine. You can see the surface of the mountain that has been dug up to collect the gold dust even now. In Nishimikawa Placer Gold Mine, there was a method called “Oh-nagashi” where a mountain containing gold dust was dug up to collect gold dust, and the excess stones and soil were washed away with a large amount of water, and then the remaining gold dust was selected by gold panning called “Yuri Board”.  In order to get the water necessary for this Oh-nagashi, there are a number of water channels called “Kinzan-e” around the area, and there still remains a total of 12 kilometers of water channel. After the close of Nishimikawa Placer Gold Mine, paddy fields were cultivated to the traces of the placer gold mine and the site of the levee, and the Kinzan-e was converted into an agricultural water channel. 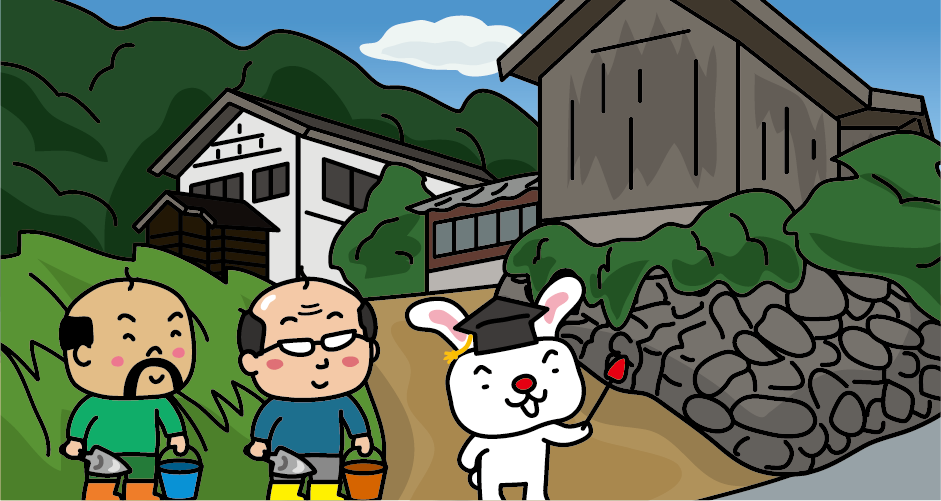 In the Sasagawa village, a stone wall is built on the foundation of a house, the boundary of a site, and the slope of a road, using waste stones generated by the mining of gold dust in a long period of time. In the surrounding mountains, there are many remains of blacksmith hut and workhouses piled with waste stones. 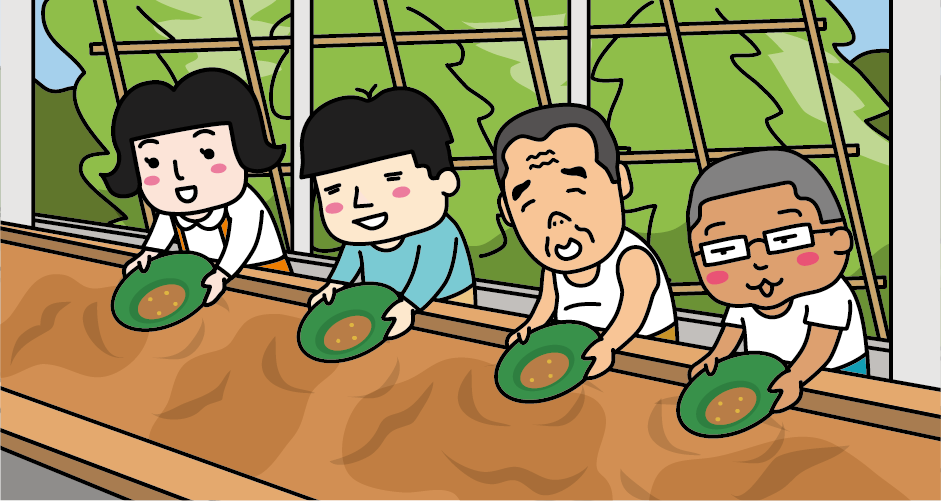 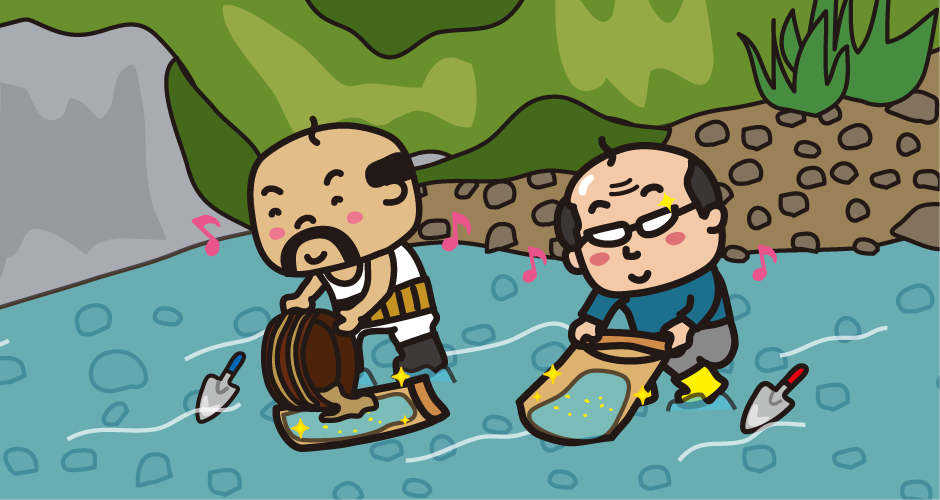