You can see critically endangered crested ibis on Sado island! With just 2cm of distance so you’ll be certainly excited!

This time, I’m going to explain about crested ibis who is critically endangered.

Crested ibis was present in all over east Asia from Japan, Russia, China and Korea until early 19th century. However, from the late 19th century to 20th century, many of them were hunted and most of their habitat were destroyed due to environmental degradation and they became critically endangered in the late 20th century. In Japan, in 1981, artificial breeding was attempted by capturing last 5 wild crested ibis on Sado island, Niigata prefecture but it didn’t work out. In 2003, the last crested ibis born in Japan died. 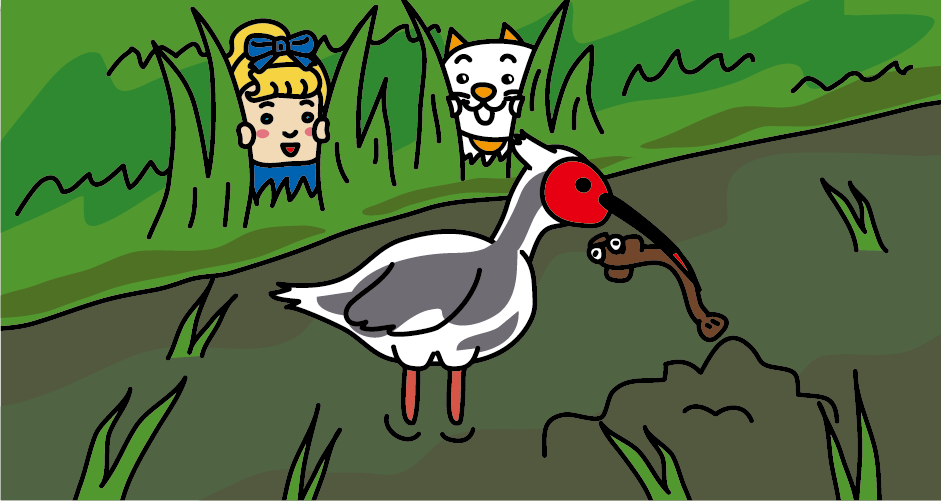 Crested ibis is a bird of Pelecaniformes order, Threskiornithidae family. It’s length is about 75cm and with its wings it reaches 140cm. The scientific name is “Nipponia nippon”. German doctor Siebold who came to Japan at the end of Edo period sent the sample of crested ibis to Dutch museum. At that time, it was thought to exist only in Japan so the scientific name “Nipponia nippon” was given.

Though crested ibis is written “scarlet hern” in Japanese character, it doesn’t belong to the same family as hern. Their body is white and inside their wings and remex are in dark pink with scarlet. This color is called “crested ibis color” (the color number is #F5C9C6). One of the reason that crested ibis became critically endangered was the over-hunting for this beautiful crested ibis color feather. Also, they eat weatherfish, river crab and frog stepping on planted seedlings so they were hunted also as bird pest of paddy. 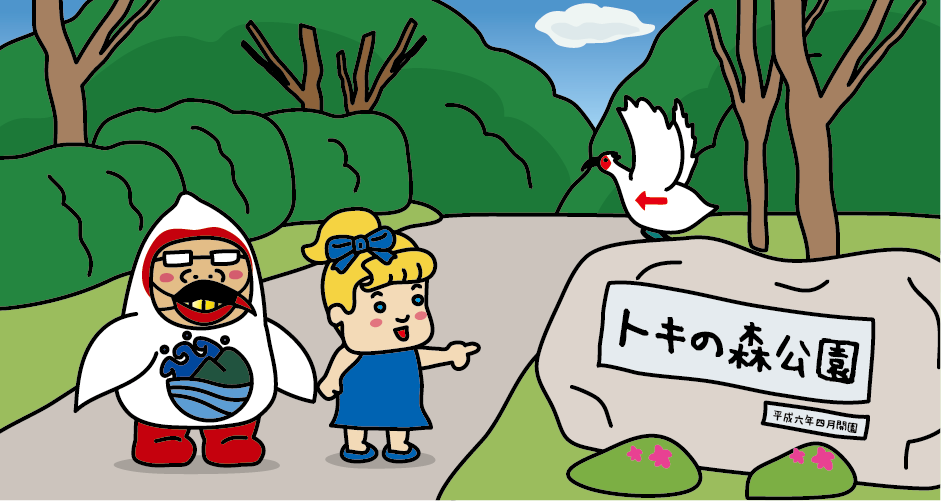 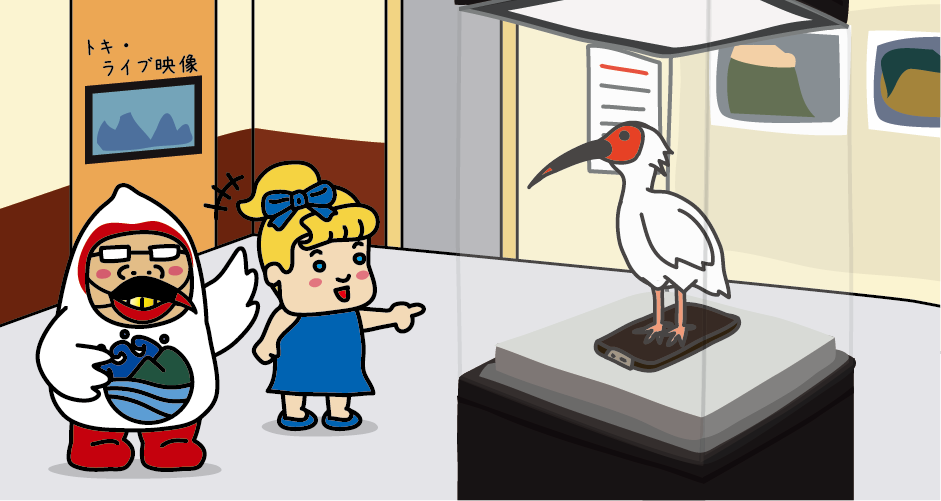 In “Crested Ibis Exposition”, you can learn the biology and history of crested ibis and the protection activity from panel and video etc. Stuffed crested ibis and skeleton samples are also exhibited. 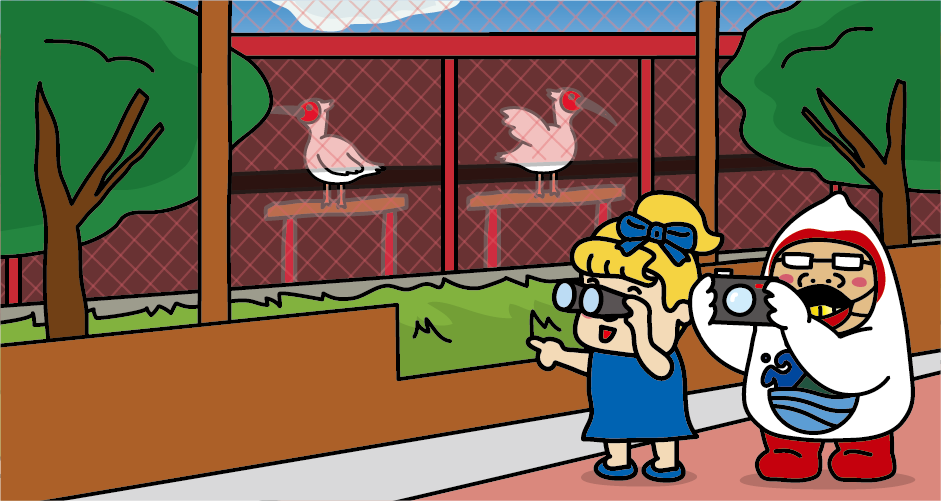 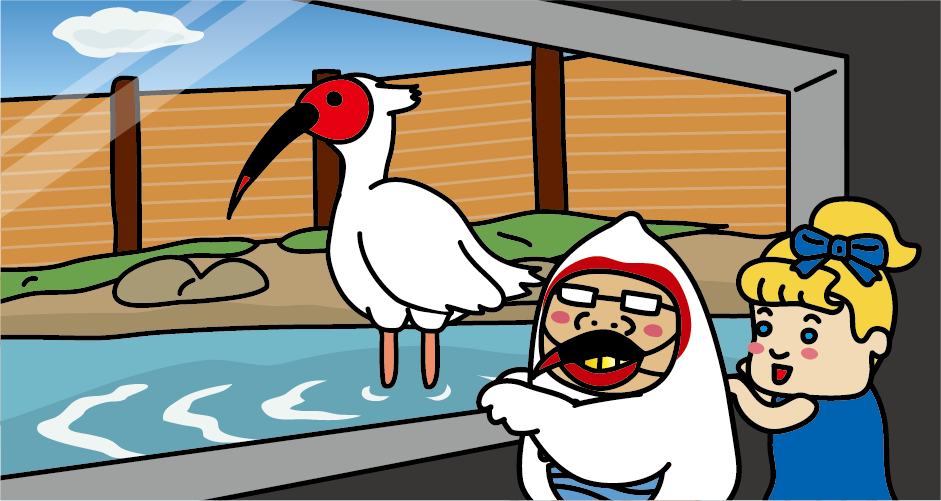 “Crested Ibis Communicating Plaza” is the most popular facility in crested ibis forest park where you can observe biology of crested ibis such as flying, foraging and nesting in the large cage which imitates natural environment, from close distance through magic mirror. Before, we could only observe crested ibis from observation path in exposition and live camera but since Crested Ibis Communicating Plaza is completed, we can observe the way they catch weatherfish, build nest, incubate and raise baby birds with only 2 cm of distance. 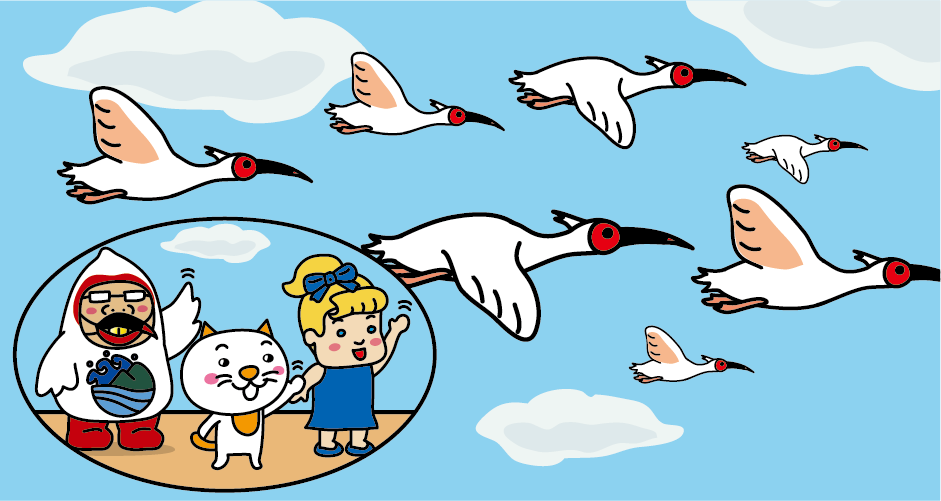 Since 2008, crested ibis is released to wild every year. Ones selected from those raised in Crested Ibis Protection Center are transfered to “Reviving Wild Station” and released after acclimatizing training. So far, more than 280 crested ibis were released (number in May 2018). Some of them may be attacked by raptores, become ill or die in harsh natural environment. Currently, around Sado island. there are 283 crested ibis together with those released and born in wild (number in May 2018). In 2016, baby birds were born from the couple who were born in the wild (the grand-children generation of released bird). This birth of “pure wild” baby bird gained attention since it was after 40 years.

If you wish to see wild crested ibis in Sado, you can find in paddy field near crested ibis forest park. It’s easiest to find them while they eat. During reproductive period from January to June, they turn into black-gray color. From September to December, after rice harvest, it’s easier to find them since they are white. When observing wild crested ibis, there are rules such as “don’t get close to crested ibis”, “don’t get off from the car”, “don’t make large noise or light” etc. Please pay attention while you observe.