HOME > Travel Magazine > Niigata Prefecture > Pay attention to the roof of three-story yagura (turret) of Shibata castle! There are three Shachihoko (fish shaped ornaments placed on a roof of castles), and it is absolutely wonderful for castle lovers. This is a related castle of Ako Roshi (loadless samurai of Ako domain), Yasubei Horie!

Pay attention to the roof of three-story yagura (turret) of Shibata castle! There are three Shachihoko (fish shaped ornaments placed on a roof of castles), and it is absolutely wonderful for castle lovers. This is a related castle of Ako Roshi (loadless samurai of Ako domain), Yasubei Horie!

Shibata castle is one of the “Japan’s Top 100 Castles” in Shibata City, Niigata Prefecture. Since the surroundings of the castle were wetland and many irises were growing naturally, so it was called as the iris castle. Originally, it was a castle of Shibata family, a clan of Echigo (present Niigata Prefecture) since Kamakura Era, but in 1587, Shibata family was destroyed by Kagekatsu Uesugi and Shibata castle was also abandoned. When Mr. Uesugi forced relocation to Aizu by the Toyotomi government, Hidekatsu Mizoguchi came to Shibata from Kaga (present Ishikawa Prefecture) and founded the domain of Shibata. Abandoned Shibata castle was repaired over the 56 years and Mizoguchi family served as the lord of the castle for about 270 years until Meiji Era. In 1873, the majority of the building of the castle except for the front gate of main building, the Sumi yagura (corner towers) of outer citadel and stone wall were demolished by the order of Meiji government and the former Japanese army was placed at the remained site of castle. Even for now, Camp Shibata of Japan Ground Self Defense Force is placed at there. 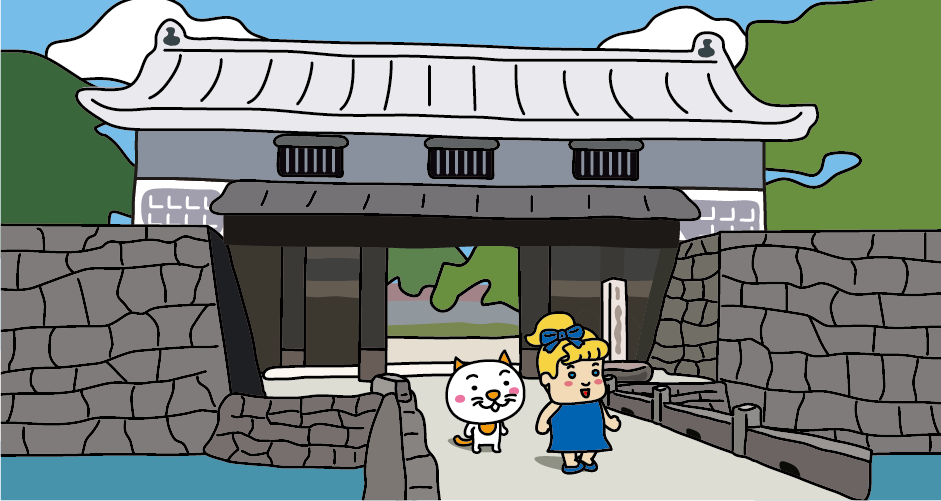 In 2004, using the old pictures taken before being demolished as reference, the three-story yagura and Tatsumi yagura (yagura located southeast, “Tatsumi” direction)  were faithfully restored. In relation of the camp of Japan Ground Self Defense Force, you can only see the front gate of main building and the Sumi yagura of outer citadel which are national important cultural properties and restored Tatsumi yagura. The three-story yagura is not open to the public.

You can only enter into Shibata castle from April 1 to November 30. 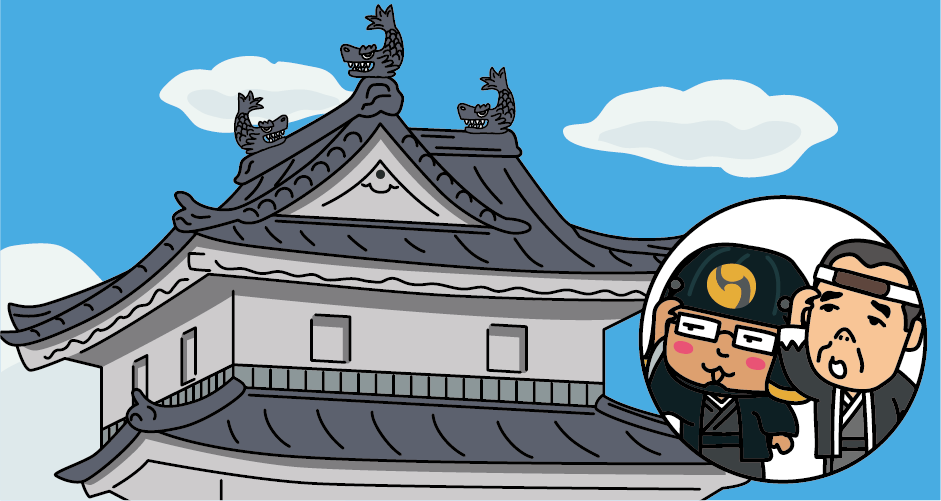 Shibata castle did not have Tenshu (the keep of a castle)  and the three-story yagura played that role. There are usually two Shachihoko to put on the roof, but the building of this three-story yagura is T-shaped, so there are “3 Shachihoko” located and it is very unique in the whole country. Shachihoko is a fictional sea animal has the face of a tiger and the body of fish and it spurt water out. There is an old saying that Shachihoko will protect buildings from fire. 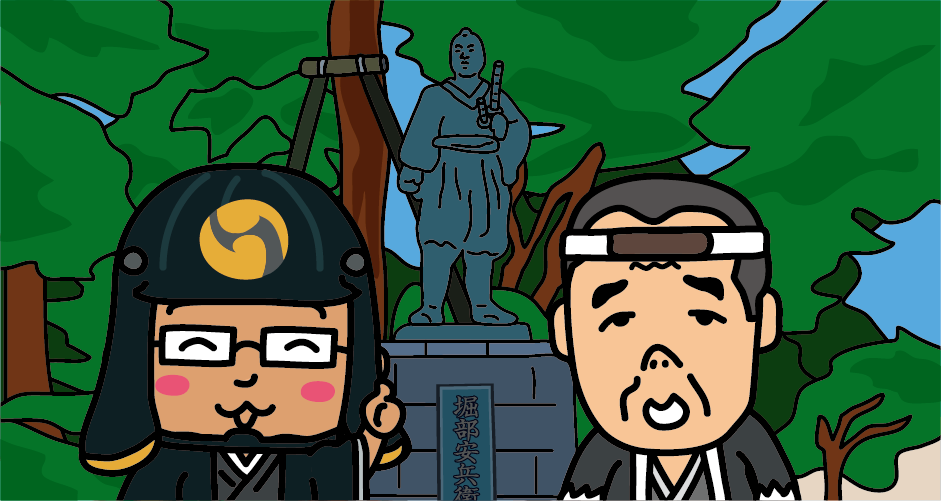 In front of the front gate of main building, there is a statue of Yasubei Horie who was one of 47 Ako Roshi. Ako Roshi is very famous for the story of “Chushingura” . He was born in Nakayama family who served Shibata domain and he was living in Shibata until 19 years old to come to Tokyo. After he came to Tokyo, he became an adopted child of Horie family. He is the great-grandchild of first Shibata domain’s lord, Hidekatsu Mizoguchi. 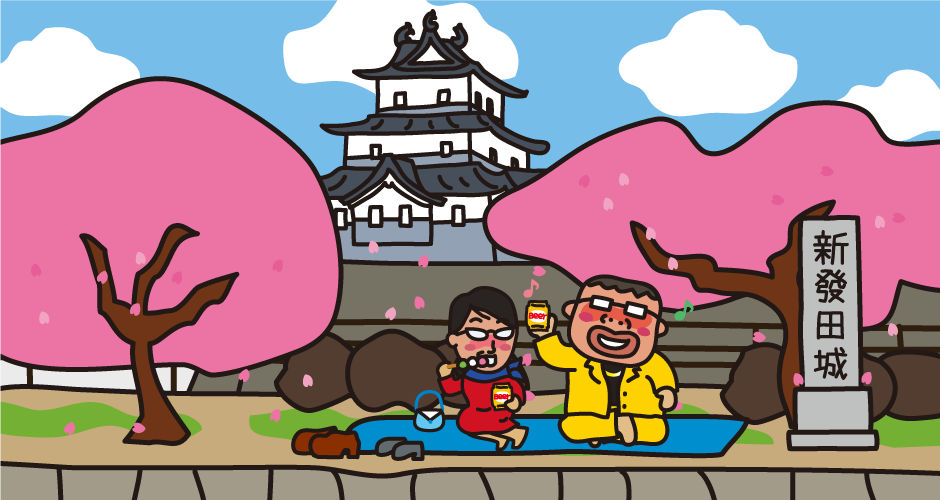 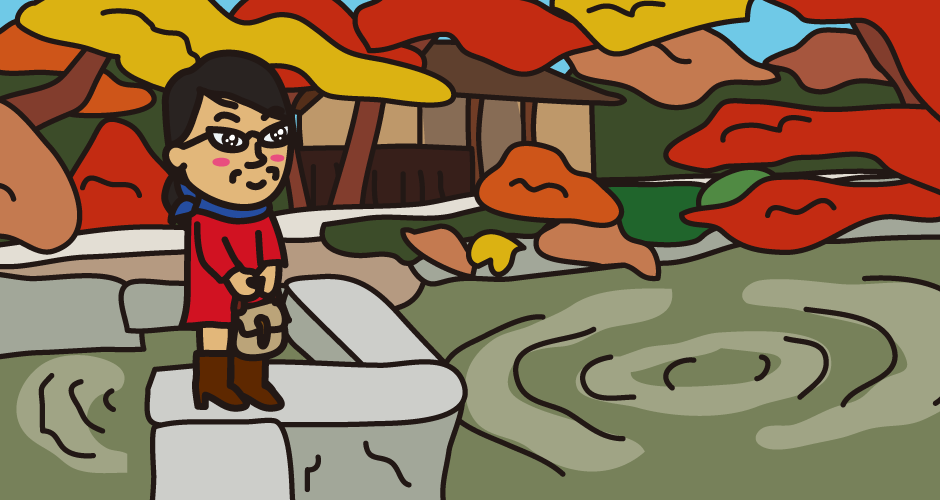 Shimizu-en  (Shimizu garden) is a suburban residence of the lord of Shibata domain, Mr. Mizoguchi. In the center of the garden, there is a pond that shaped the Chinese character of “water” in Cursive script. Also, this is the circle style garden incorporate Eight Views of Omi. Shimizu-en is a garden of lord representing Echigo that is also designated as National Scenic Beauty. 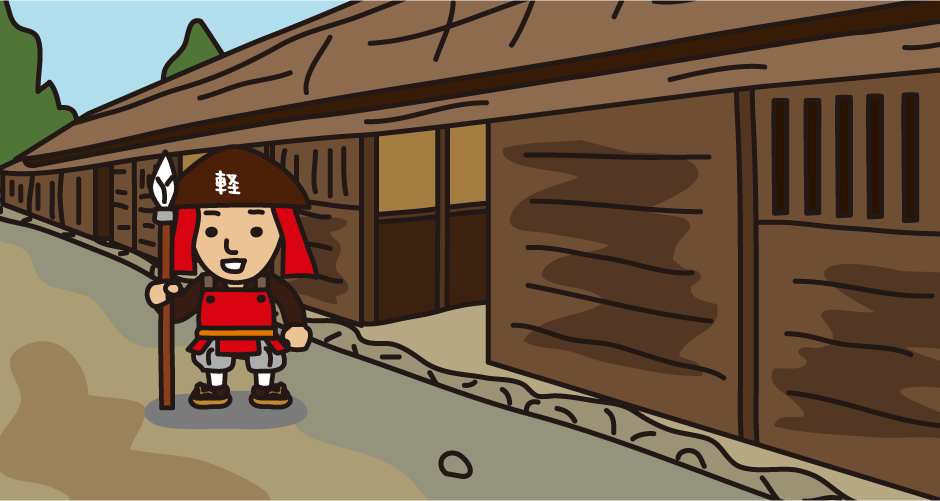 On the east side of Shimizu-en, there is “Ashigaru Nagaya (tenement house for foot soldiers)”  across Shibata River. Ashigaru is a common soldier of Samurai period. They are samurai with the lowest status who is almost the same as farmers. They usually do agricultural work and go to fight when the war happens. There used to be eight households living in one tenement house. There were four tenement houses in Edo era, but now only one building exists. It is designated as an important cultural property of Japan. 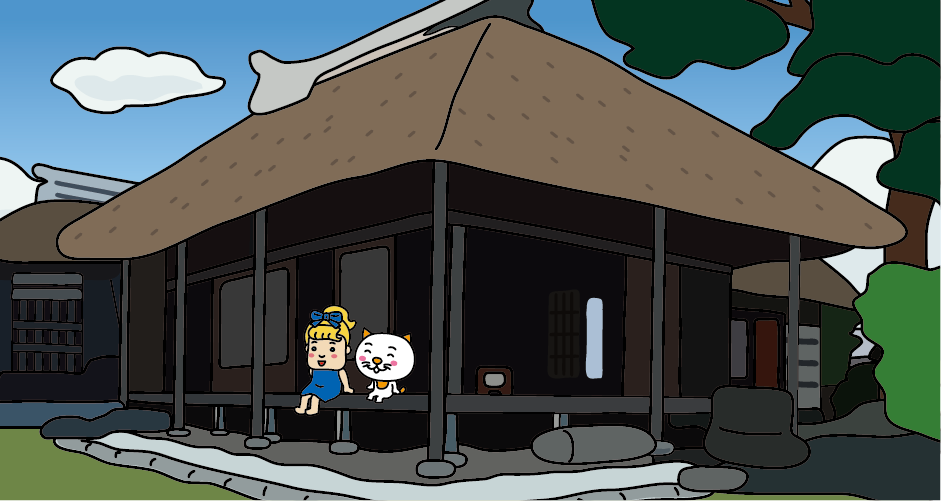 Ijimino O-chaya (rest house of Ijimino)  started since it was a temporary dwelling of first lord Hidekatsu Mizoguchi until the completion of Shibata castle. At the age of third generation, it was maintained as a villa and the garden was made in fourth generation and a villa became a tea-ceremony house. It is designated as National Scenic Beauty. 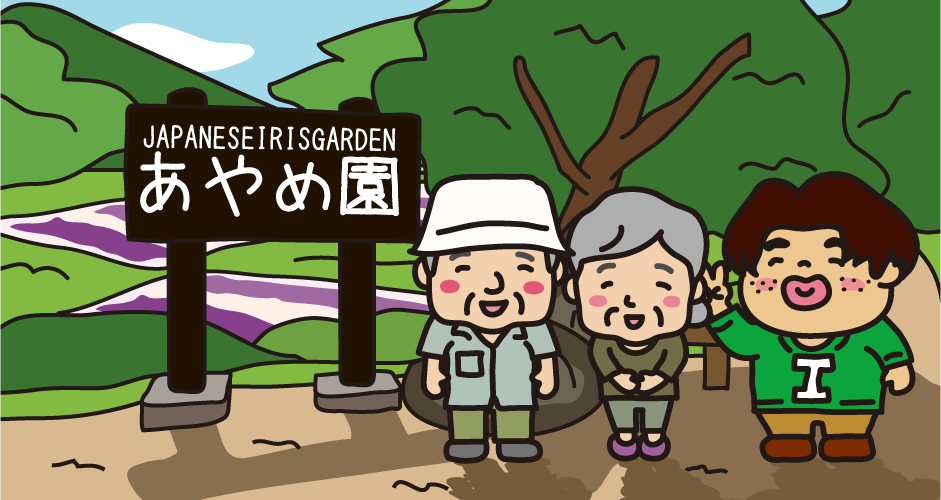 Near Ijimino O-chaya, there is “Ijimino Park” and in the park, there is “Iris Garden”. In “Iris Garden”, 300 variants and 600, 000 irises are blooming in 1.8ha of garden. “Iris Festival” will be held from the middle of June every year and fireflies will wink their light from the end of June.